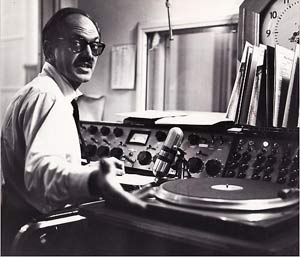 "...almost all of what I know about jazz broadcasting, I learned listening to Just Jazz with Ed Beach."

Ed Beach, a groundbreaking radio host whose integrity and knowledge were a welcome antidote to the careless and ill-informed manner in which jazz all too often was - and still is - presented on the radio, died on December 25, 2009, at the age of 86 in Eugene, Oregon. Beach's popular and informative Just Jazz program, which was heard over New York's WRVR (106.7 FM ) from 1961 to 1976, set a standard for all subsequent jazz broadcasters that has been rarely equaled, and never exceeded.

Ed Beach was born on January 16, 1923, in Winnipeg, Canada, and his family eventually settled in Portland, Oregon. A pianist in his youth, he performed throughout the West with a jazz trio and earned a degree in theater from Portland's Lewis & Clark College. He did graduate work at Cornell University, acted in summer stock, regional theater, and on New York stages, and joined WNYC as a classical music disc jockey in the late 1950s. When WRVR began broadcasting in January 1961, Beach was hired as a classical DJ, but a few months later inaugurated his Just Jazz show.

In his innovative Just Jazz format, Beach would devote an entire two-hour program -- often two programs - to the work of a single jazz artist. Showing rare respect for the music, and his audience, Beach consistently and meticulously gave full information for every track he played - the song title, composer, album, and complete personnel - a practice that still is uncommon in jazz radio.

Beach left WRVR shortly after it was sold in 1976. (The station eventually changed its format and call letters, permanently abandoning jazz in 1980.) He returned to Oregon in 1977, where he played music part time and catalogued his immense record collection.

If I might be allowed a personal note, I call my program at WNTI Just Jazz as a tribute to Ed Beach. My weekly "Just Jazz Presents…" segments are inspired by his show's unique format. I discovered Beach's Just Jazz on the long lost and much missed 106.7 WRVR during the summer of 1970, and through my high school and college years I tuned in religiously, captivated by his rich baritone voice, deliberate cadences, erudite manner, dry wit, and encyclopedic knowledge of the music. I can say honestly that much of what I know about jazz, and almost all of what I know about jazz broadcasting, I learned listening to Just Jazz with Ed Beach.