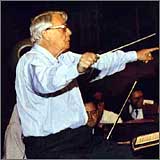 Arguments about the relationship between classical music and politics are everywhere these days. Some controversies have been going on for decades. For instance, was Russian composer Shostakovich a "Covert Dissenter or Stalinist Toady?" Other wrangles are more recent. Just two years ago, Europe was embroiled in an often-shrill debate over Simon Rattle's decision to perform Beethoven's Ninth Symphony at the site of a former concentration camp in Mauthausen, Austria. Depending on whom you asked, the concert was either a deeply felt memorial or a tasteless use of a house of death for aesthetic enjoyment.

One new case has special resonance for Bostonians as well as for the issue of ideology and music. In an article entitled "The Boston/Vichy Connection" in the current issue of the journal Salmagundi, Jeffrey Mehlman examines the wartime activities of Charles Munch, who was the Boston Symphony Orchestra's music director from 1949 to 1962. As Alex Beam first reported in the Boston Globe, Munch claimed to questioners that he "did not conduct during the German occupation." Jeffrey Mehlman's conclusion that Munch was much more active in the Vichy regime than was previously known, is quite a shocker. Public discussion of the revelation has not been very fruitful, which is a shame. Beyond its sensational news value, the discovery raises provocative questions about whether musicians should be judged for their politics and how forthcoming they should be expected to be about their past.

Mehlman, who teaches French literature and literary theory at Boston University, cites two important pieces of recent research into the Vichy regime. First, Munch (who spelled his name Mżnch during the war) performed a government-commissioned cantata called "Sżryż" by a long-forgotten composer named Bachelet, himself a collaborator. The text of "Sżryż" is a poem in the style of an Indian Veda, and its closing lines refer to the Sun God who is seen as a protector of "peaceful" and "pure-blooded races." As Mehlman points out, it's impossible now (and would have been inconceivable then) not to have seen this as an allegory of the relation between occupied France and Nazi Germany.

The second is Munch's place on one of the Vichy government's official music committees, all of which were headed by the pianist Alfred Cortot, one of the regime's most notorious collaborators. Mehlman reports that the head of the subcommittee on orchestras and choruses was "Charles Mżnch." This "would make Munch something of a collaborator himself." The author goes on to argue that, in this capacity, Munch "would have had to submit to the authorities a list of Jews" in his orchestra. This would have been an ironic act of moral compromise for a man who was awarded the Legion d'Honneur in 1945.

Because even appearing to be working in sympathy with the Third Reich is potentially explosive, it's important to note that the charge isn't that Munch was guilty of anti-Semitism, as an irate letter to the "Globe" claimed. Nothing in Mehlman's article supports the view that Munch actively supported the policies of either the Nazis or the Vichy government. In fact, whether these few documented activities really establish that Munch was a collaborator is itself far from clear.

What is so troubling about this case is the conductor's sense he was not accountable to history. In his autobiography, Munch says little about his wartime activities, only noting that, during the period in question, his role "was to help saddened souls escape to happier worlds" by conducting music with "an ardor that was multiplied a thousandfold by the pain of seeing my country gagged, enchained and murdered." Like most musicians at the time, he believed deeply in music's power to be a mass anodyne, untainted by politics.

But the idea that music, whatever its legendary healing powers, could have functioned in such an idealistic sense in the midst of a deeply victimized land is a willful act of wishful thinking. So wishful is it, that it is reasonable to conjecture that Munch's decision to conduct in Paris and head a Cortot committee was not done out of naivetż, but for the sake of his career. In his biography, Munch appears to have substituted clear conviction for compromise. Either that or he suffered from a befuddled memory.

Munch was far from the only musician forced to confront the painful issues generated by the intersection of music and politics. The most famous instance is that of the German conductor Wilhelm Furtwżngler, whose case resembles Munch's in more ways than one. But a distinction can certainly be made between Munch's case on the one hand, and that of his compatriot Paul Paray, on the other. As Mehlman points out, Paray, also a conductor, immediately resigned an orchestra job when he was asked to submit a list of "Israelite" musicians. A May 1942 concert he conducted in Lyon became a show of Resistance force, with Paray ordering the musicians to stand and play the Marseillaise.

Munch's case is more vexing because the historical picture we have is either indistinct or ambiguous. We want such figures to be either heroes or villains, but Munch becomes neither, unless the ethical dilemmas generated by the new issues are resolved. "The real Charles Munch" disappears into the historical shadows ż our ability to judge is limited, and for many that is deeply distressing.

This is why the recent activities of Daniel Barenboim are pertinent. The Israeli-born conductor and pianist is known for his outspoken criticism of Israel's Palestinian policies. Recently, he played a piano recital in the town of Ramallah, in the occupied West Bank, where he also listened to young Palestinian musicians play. A few days later, Barenboim was accosted by a group of Israelis from the right-wing Kach party, who called him a traitor and demanded he be arrested and jailed for traveling to the occupied territories.

While Barenboim claims he went to Ramallah only as a musician, not a politician, he clearly understood that playing the music of Beethoven in the occupied territories carries deep political significance. About the Palestinians who came to hear him play, he said to an Israeli newspaper that, "some of them told me it was a good feeling to meet someone who came from Israel, and what he brought with him was music. I think that at least for a few minutes, I made a contribution to lowering the level of hatred."

Barenboim clearly understands music's power in the midst of social turmoil and hatred and isn't afraid to stand squarely behind his views, whatever others' opinions of them. Munch made himself into a luminary in two very different worlds ż those of wartime Paris and postwar Boston. One wishes that Munch had left us with such clearly drawn lines.